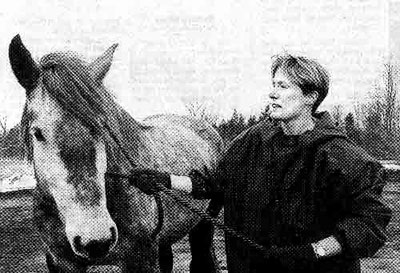 GRAND ISLE -- Senior Airman Tam Cristman yearns to stay on the horse farm in Grand Isle she and her business partner started three years ago. It is her dream

This dream conflicts with another: to serve her country, especially in a time of war. The 34-year-old Cristman's duties on a security force with the National Guard sent her all over the country last year, away from her animals.

With the nation at war with Iraq, she faces the possibility of another tour that will take her far from Breakaway Farm, an absence her farm might not survive.

"I'm being pulled apart," Cristman said. Pretty hard to run a business when you aren't there, she said.

The nation is at war half a world away, but its effects are being felt on the family farm in Vermont. To the National Guard, farmers are soldiers, like every other volunteer, said Maj. Lloyd Goodrow, executive director of the Vermont Committee for Employer Support of the Guard and Reserve.

"No doubt this does create a hardship, especially on the self-employed," Goodrow said. "People join the military service knowing of the possibility that they may be called away from their business. No one does this blindly."

The expectation hasn't been the problem, Cristman said. Rather, it's finding people to replace her while she serves her country, a problem that might force her to choose between her dreams. Finding dreams

Cristman joined the Army National Guard in 1994, a family tradition dating back to her great-grandfather. She switched to the Air National Guard in 1998 while she was between jobs and thought she might want to travel. She indulged an early childhood dream of being a guard police officer for her country.

"I had no idea that in a few years I would own my own farm," she said.

Three years ago Cristman and her business partner, Sarah Pettitt, poured nearly $1 million into buying and renovating the farm. The plan was to board and breed horses and other animals. Cristman spent the required time on the Vermont air base in South Burlington, training and patrolling as a security officer.

Just a year later, Cristman was called up. She spent three months in Texas after Sept. 11, 2001, and trained in Nevada last summer. She was scheduled to deploy overseas last month, but a paperwork glitch stopped the trip.

Meanwhile, the farm has gone through four farm hands. Pettitt, who splits her time between England and Burlington, picked up the slack during the dawn hours before going to her full-time job as a Champlain College professor. Between travel and the job, helping out with a project in which she was supposed to be a silent partner has worn her down.

"I can't keep going on like this, either," Pettitt said. Dealing with it.

She's advertised for help. Nine people responded. Not one called back after Cristman explained the farm work and pay, even though the position involved flexible hours and a room.

"People say to me that I signed up with the National Guard and so I must deal with it. They're right,"
she said, "but horses need to be fed."

>If the war lingers, Cristman could be called up again. She could probably find a loophole and escape her duty, but she doesn't want to try.

"I like it," she said of her guard duty. "We are at war. There's an obligation there, too."

Selling the animals, the farm, is an option, Cristman added quietly.

"These were my dreams as a kid, and you figure they will never, ever happen," she said. "All of a sudden, they've happened. Would you want to give up on them?"

Our mission is to provide equine boarding, training and all equine related services at affordable rates.